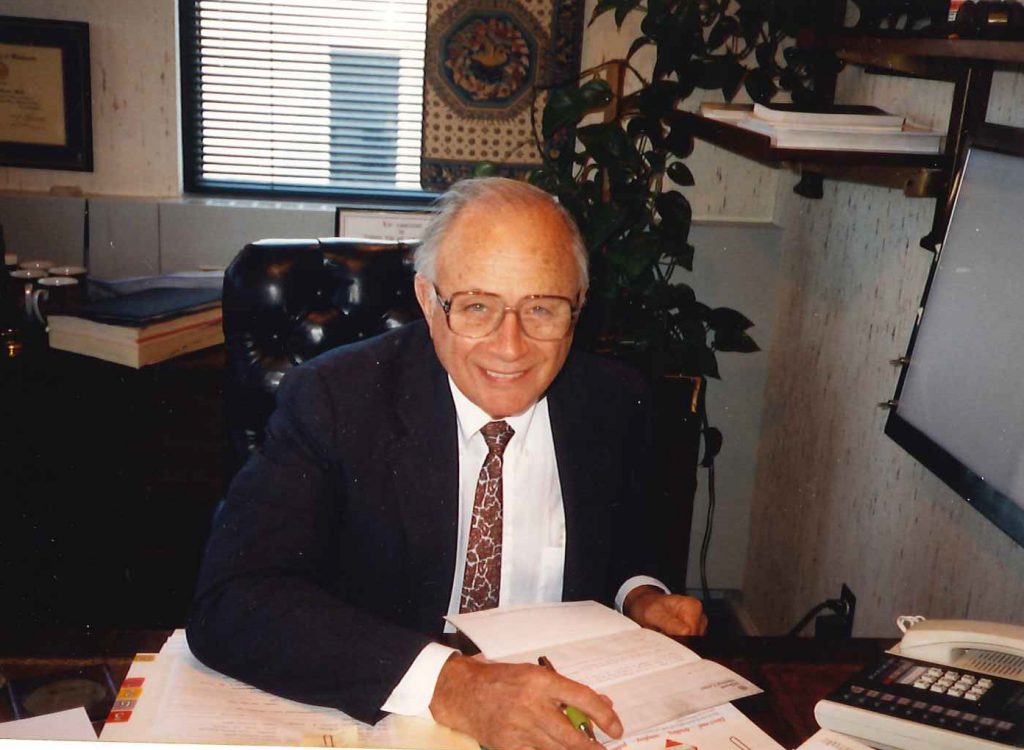 Norman L. Dunitz, M.D., died peacefully at his home on September 10, 2022. He was born to Ida and Philip Dunitz, the oldest of three children, on September 25, 1927, in Newton, Iowa which is also the home of the Maytag washing machine and the internationally famous Maytag blue cheese. Maytag played a pivotal role in Norm’s childhood: His earliest job was sweeping floors at the factory, and to this day, there is always a round of blue cheese in the Dunitz refrigerator. His High School yearbook describes Norm as “The brainy member of the Senior Class who found time for dancing and fun.” It reflects he was a Renaissance man; he lettered in golf, was on the varsity football and basketball teams, played clarinet in a Jazz Band, and was Senior Class Poet. When one of his grandchildren was told of this latter honor, he asked, “Is that a thing?”

While in college, Norm met and married Annette, his partner for 71 years.  In 1958 Annette and Norm drove south to find the right community to start his medical practice, with the primary criteria being a place where he did not have to shovel snow. Landing in Tulsa, Norm opened his office at 21st and Lewis with Annette as his assistant and bookkeeper.  This one-man medical practice led to Tulsa Bone and Joint Associates P.C., now with 30 physicians. But his medical practice was only part of his professional career. He served as Chief of Staff of St John Medical Center, President of the Tulsa County Medical Association, President of the Oklahoma State Medical Association, Chair of the American Orthopedic Foot and Ankle Society, President of the Clinical Orthopedic Society, a Charter Member of the MidAmerica Orthopedic Association and the American Association for Hip and Knee Surgery. He was a Professor at the University of Oklahoma College of Medicine, a visiting Professor at Mayo Clinic, on the Editorial Board of the Journal of Clinical Orthopedics and a Fellow in the American Academy of Orthopedic Surgeons and the American College of Surgeons. His favorite volunteer experience was impacting national health care policy as an AMA delegate.

Norm’s most important professional achievement is bringing total joint replacements to Oklahoma.  In 1969, he traveled to Switzerland to train with Dr. Maurice Mueller on hip replacements. Rather than wait months for the FDA response to his request to use necessary “cement” for the operation, Norm and Annette made a personal appeal for approval in Washington D.C. Now total hip and knee replacements are ubiquitous, but Norm will always be known as the doctor who did the first one in Oklahoma.

Norm loved Tulsa and pursued his passions while benefiting the city by being on the Boards of Tulsa Opera and the Tulsa Philharmonic, secretary of the Committee of 100, and being Annette’s sidekick when she chaired various fundraisers. His involvement with athletics continued as a regular member of the University of Tulsa Hurricane Club, rarely missing a home basketball game, and a founding member of Philcrest Tennis Club. His tennis games with other octogenarians at Southern Hills Country Club are now legendary. Norm and Annette made lifelong friendships in Tulsa, around bridge, movie club, “the Rascals” and their house at Grand Lake. They loved international travel, making many trips throughout Europe, North and South America and the far east. His last international trip was to China at the age of 87!

Most of all, Norm loved his family. He attended almost all of his grandchildren’s music, dance, and theater performances and basketball, baseball, volleyball, soccer, and football games. After each grandchild turned three, he or she had an annual birthday date with “Papa Normy.” The date always included dinner, a special activity designed for the child, and a lot of Papa Normy Advice.

Norm will be remembered for his deeds of loving kindness by Annette, his children Elise (Terry) Brennan, Scott (Harriet) Dunitz, grandchildren Michelle (Ryan) McDonald, Drew Dunitz, Phil Dunitz (Whitney Mohr), Katie Brennan and Danny Brennan and great grandchildren Levi and Oliver McDonald, his sister Toby Newman, brother-in-law, Marvin Braverman, sister-in-law Jeri Dunitz, and numerous nieces, nephews, and cousins. In addition, he will be remembered by hundreds of patients and colleagues for his compassionate medical care. During the last few years, he has been shown this same kind care by Linda, Margaret, Gyn, Nicolate, Grace, Eva, Baily, Felicia, and Nikki, for whom the family is very grateful.

A Memorial Service will be September 22, 2022, at 4:00 p.m. at Southern Hills Country Club. In lieu of flowers, the family requests donations to the Orthopedic Research and Education Foundation, Tulsa Opera, Temple Israel, or B’nai Emunah.